Nurata – an Oasis Town in the Kyzylkum Desert in Uzbekistan 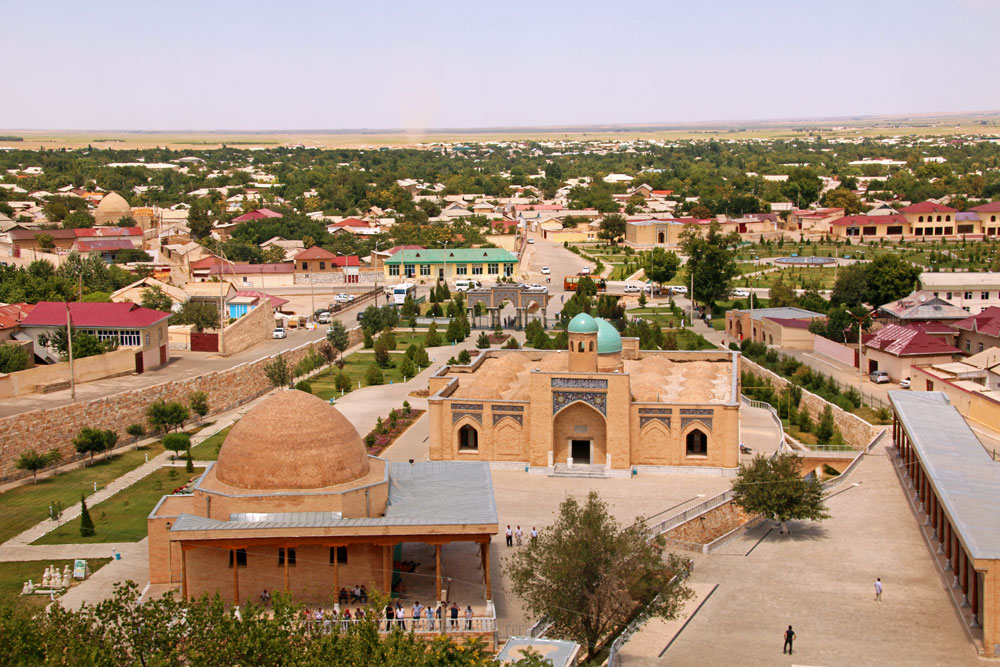 Nurata, an oasis town in the Kysylkum desert in Uzbekistan, is located at the Silk Road, one of the most important historical trade routes between Europe and Asia. The town is known for the remains of the Alexander the Great Fortress, the holy Chashma source, the Chashma complex, also known as Nurata Shrine, and for its Suzani silk and wool embroideries.

Nurata is located on the ancient Silk Road, 230 kilometres northwest of Samarkand and 75 kilometres northeast of the city Navoiy in the middle of the Kysylkum desert. The town is situated nearby the Nuratau Mountains at a height of 490 metres above sea level. The main attractions of Nurata are the remains of the Alexander the Great Fortress and Chashma, a complex of religious constructions, which includes the Chashma spring, the Djuma Mosque and a bathhouse which is named Khamom. The town is also famous for its Suzanis, cotton fabrics which are decorated with wool or silk embroideries and are especially produced in Central Asia.

The Remains of the Alexander the Great fortress

The remains of the Alexander the Great fortress sit enthroned on a hill above the city. What must have been an impressive building in the time of the former ruler, are now only completely decayed ruins. It is difficult to imagine the dimensions of the former fortress. Nevertheless, the remains are among the most important archaeological monuments in the region. These shone in the morning light when we arrived in Nurata. The ascent to the fortress is not particularly challenging for an average trained person, but when we were there, the temperatures in Nurata were around 40 degrees Celsius. But on the summit, we were rewarded with a fantastic view over the city. 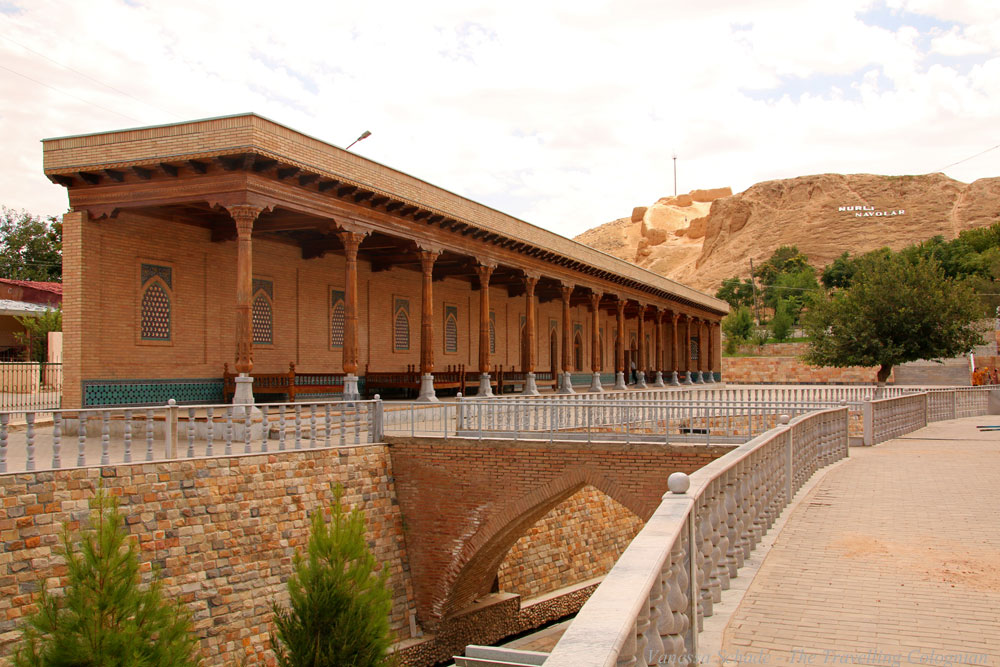 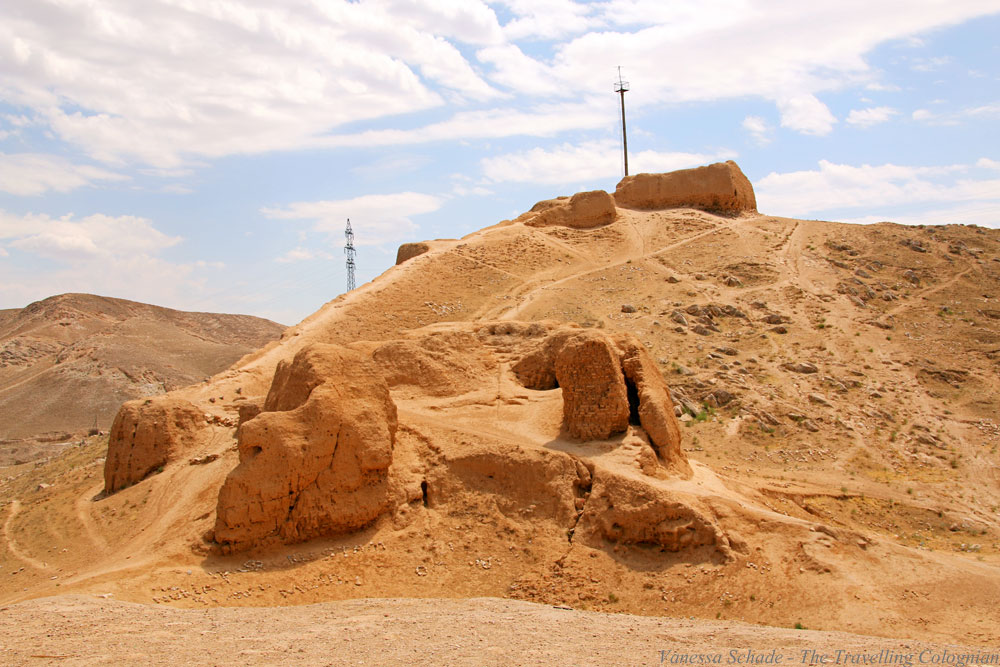 The Remains of the Alexander the Great Fortress from close up 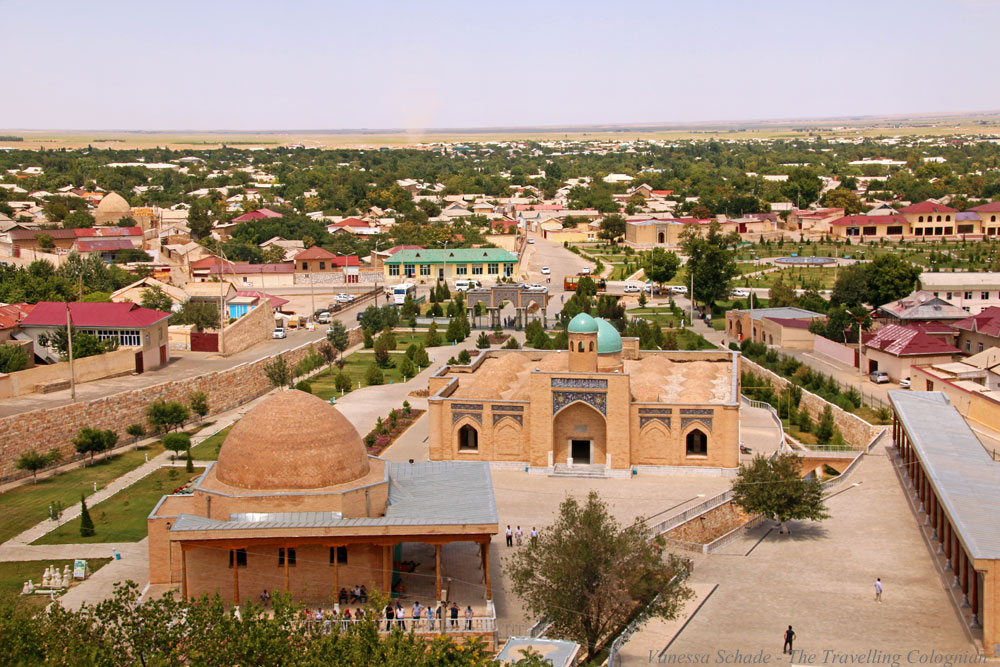 The word Chashma is Tajik and means spring. The Chashma Complex, also known as Nurata Shrine, consists of the source of the same name, the Djuma Mosque and a bathhouse which is also called Khamom. The complex is a key attraction for religious pilgrims of the region and even of the neighbouring countries. Southeast of the Chashma complex is a cemetery with tombs of several holy personalities. 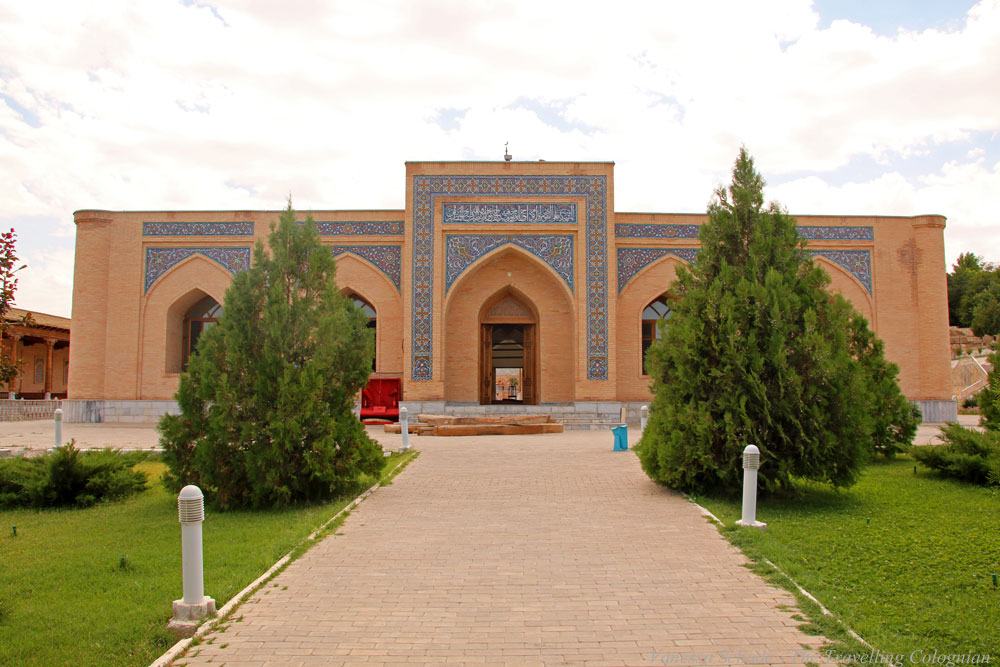 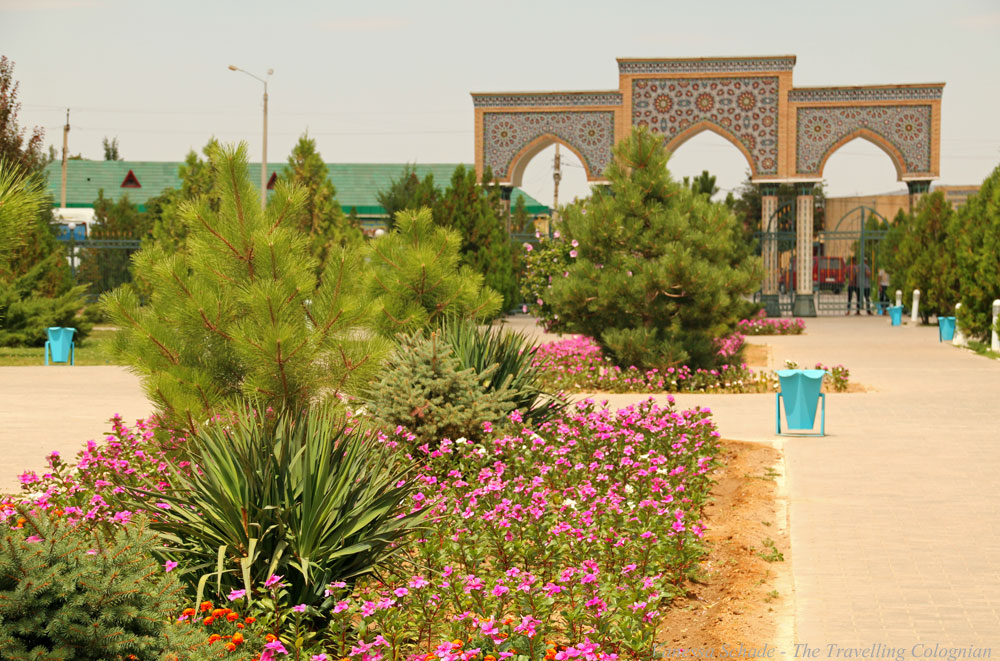 Gardens of the Chashma complex

After our descent, we visited the Chashma source which is located at the foot of the remains of the Alexander the Great fortress. The source as well as the floating fishes in it are considered sacred and may not be killed. Our Uzbek tour guide Gulnoza threw herbs into the source which enticed the fishes to the surface. Feeding the fishes is considered a good deed. 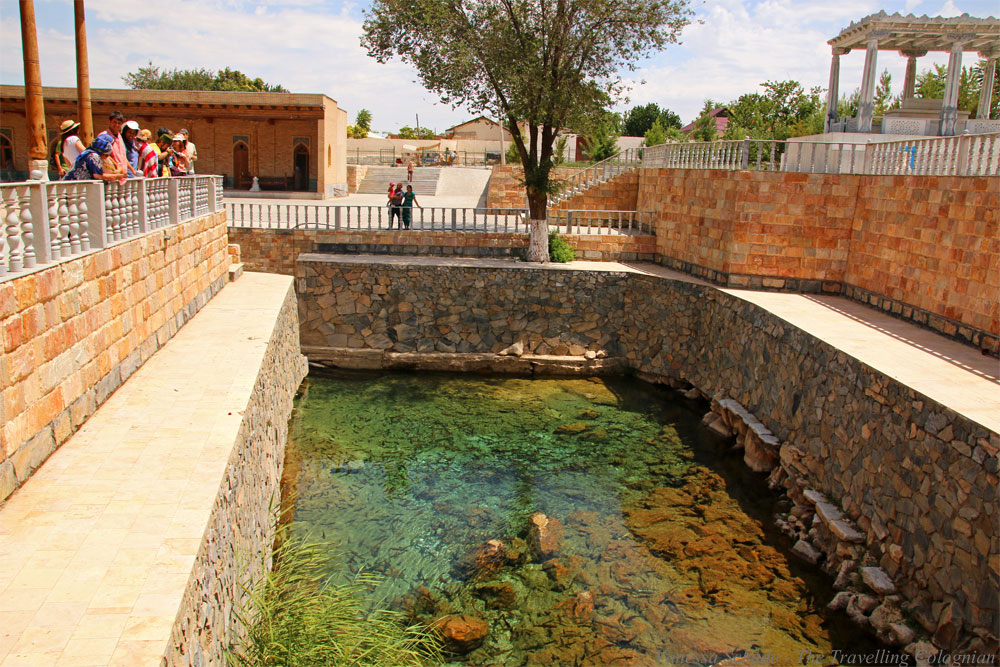 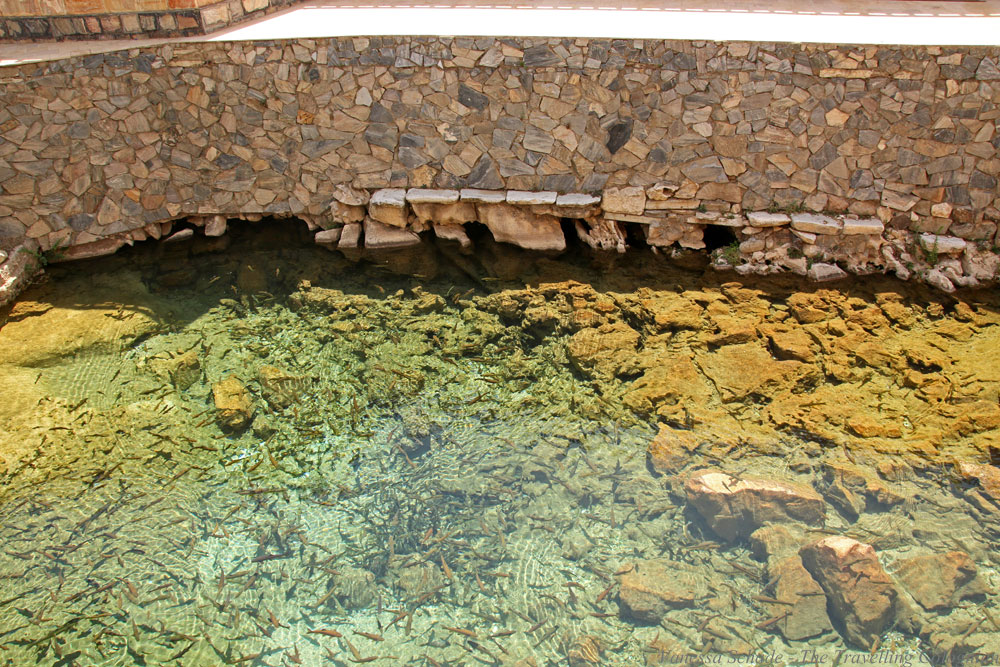 Holy fishes in the Chashma source

The Djuma Mosque which we only visited from the outside is located exactly opposite of the Chashma source. Remarkable is its giant turquoise coloured dome with a diameter of 16 metres. Moreover, it has 24 other domes and several elaborately decorated columns. 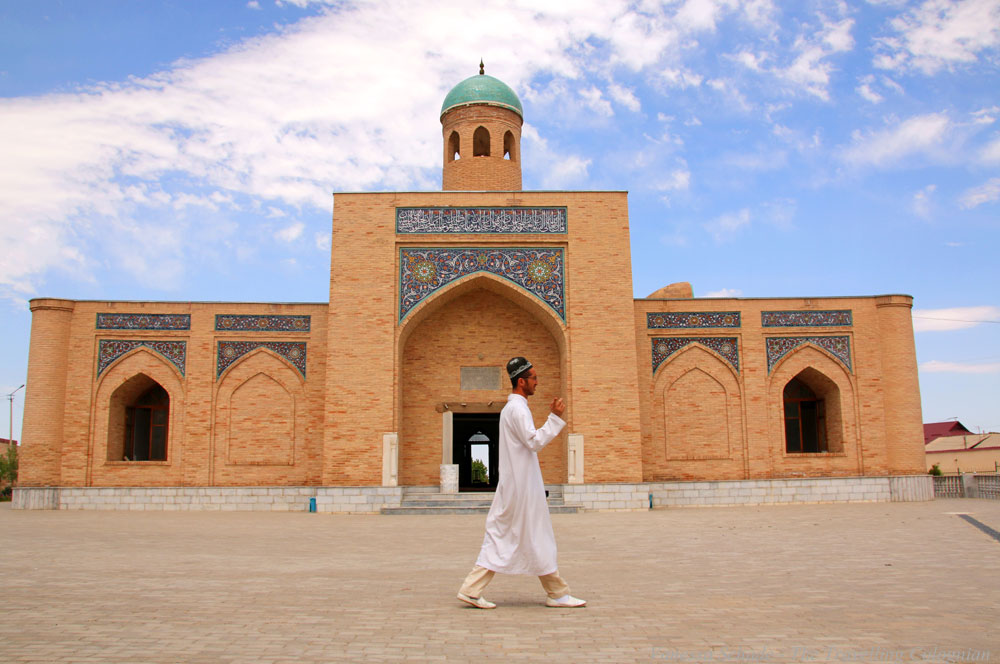 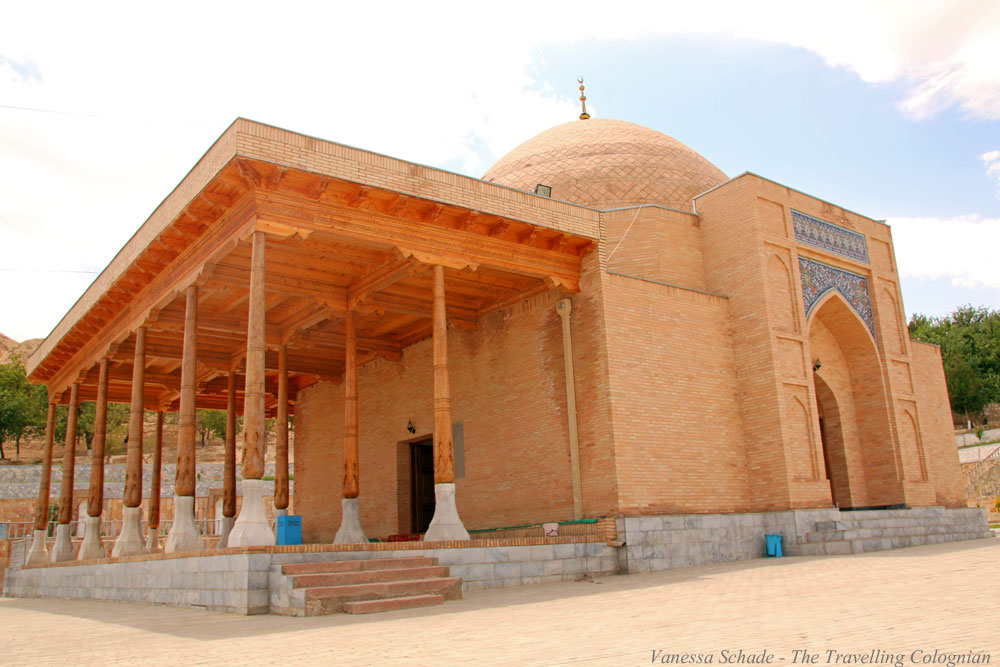 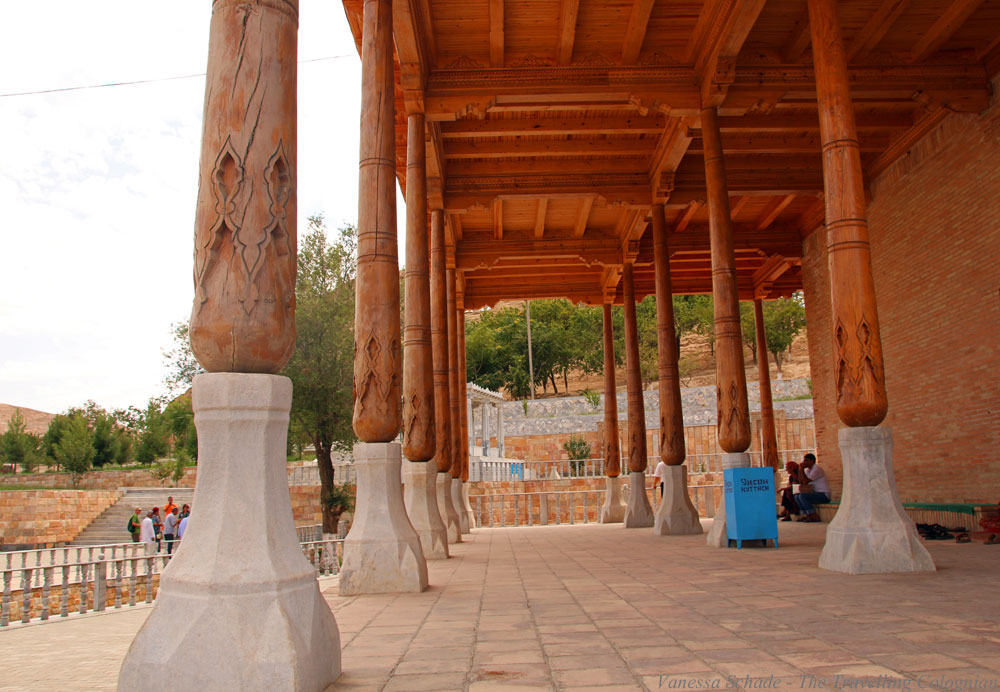 Ornate columns at the Khamom bathhouse

In front of the Khamom bathhouse, we met, just as on the way to the exit, several pilgrims who visited the Chashma complex. 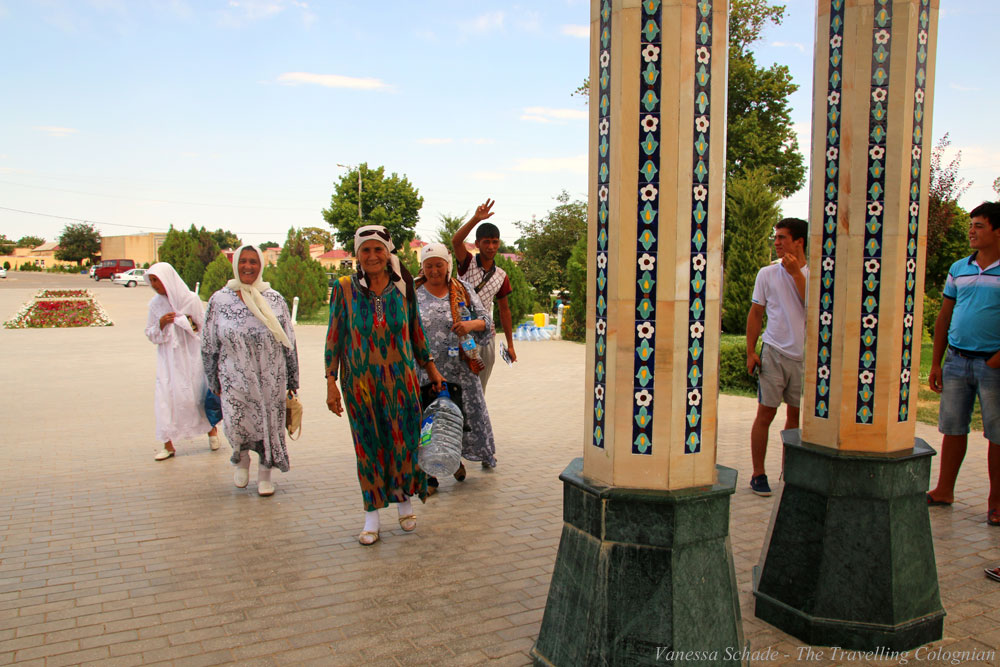 Pilgrims in front of the Chashma complex 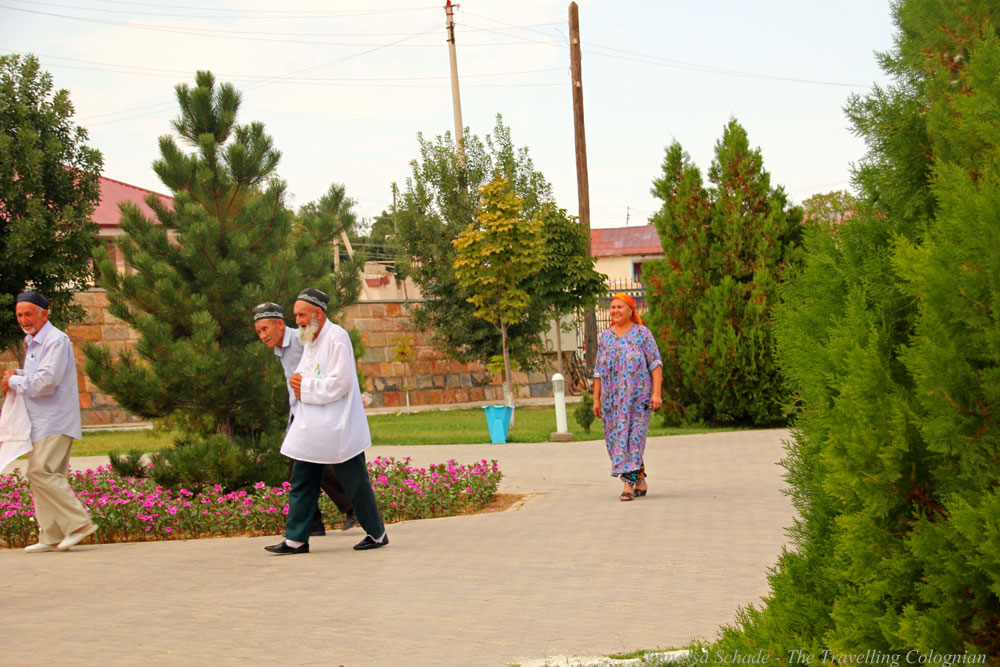 Uzbek believers in the Chashma complex

Nurata is famous for its Suzanis, large format cotton fabrics with silk and wool embroideries which are made in Uzbekistan, Tajikistan and other Central Asian countries. You will probably get them in shops in Nurata and in other destinations in Uzbekistan and Central Asia but since I didn’t go shopping on my Uzbekistan trip I can’t say this for sure. My group and I were offered cushion covers with Suzani wool embroideries in the restaurant Nur by a group of local females. I bought two cushion covers but I didn’t feel pushed to do so. 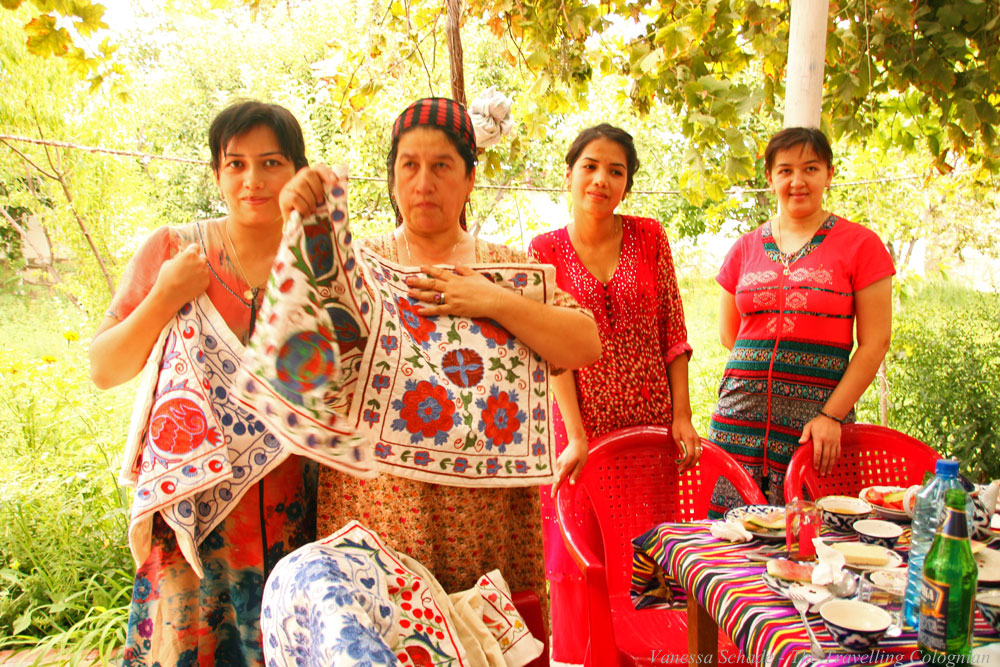 The restaurant Nur is the only restaurant in Nurata but it is highly recommendable. Just behind the entrance, we were greeted by two friendly locals who were sitting around a flat table. There were more tables on the roofed terrace and in the courtyard. We sat down at a table under a leaf canopy. Before the main course which we ordered à la carte, we were served a selection of sweet and savoury starters. 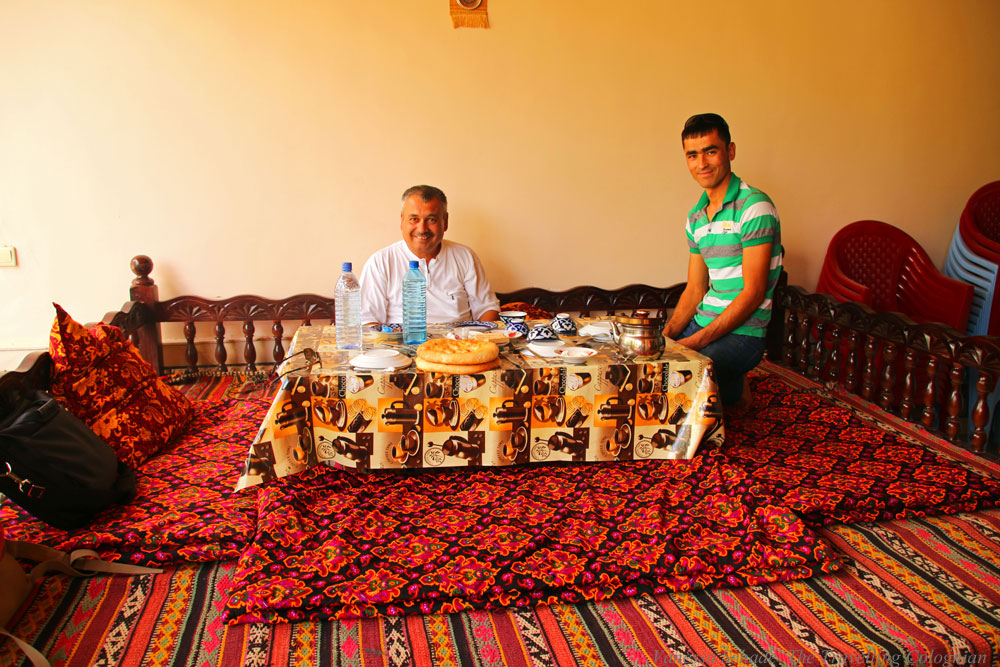 Friendly locals at the restaurant Nur 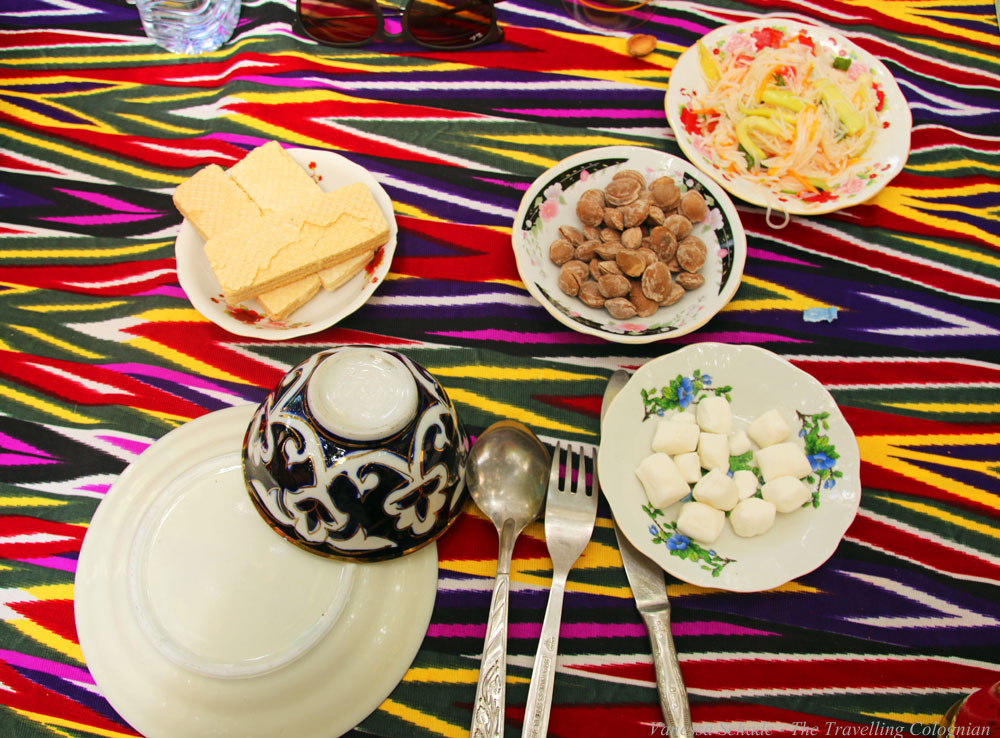 Some of our starters

How to get to Nurata

You can take a taxi (for about 3.50 US-Dollars) or a minibus (for about 2.50 US-Dollars) from Navoiy to Nurata. There is a direct train connection from Samarkand to Navoiy. Of course, you can also take a taxi from Samarkand to Nurata but I can’t tell you how much that costs. English is only partially spoken in Uzbekistan. You will easier get around when you speak Russian or even Uzbek. In case you think that the individual journey from Samarkand is too complicated, you can also visit Nurata as part of a tour. Probably, there are several travel agencies which offer trips to Nurata, to the Aydarkul lake including overnight stays in one of the yurt camps in the desert. I travelled through Uzbekistan* with G Adventures*, a Canadian adventure travel company which offers small group tours. They also offer tours through Tajikistan*, Kazakhstan and Kyrgyzstan*, a tour through three Central Asian countries* and another tour through four of the Stans*.

If you travel from Samarkand or Bukhara to Aydarkul lake and to one of the yurt camps in the Kysylkum desert, the oasis town of Nurata and the remains of the Alexander the Great fortress are definitely worth a visit. When you only have a limited amount of time in Uzbekistan, and Nurata and the Aydarkul lake are not on your itinerary anyway, I probably wouldn’t drive there, specifically. However, I would also recommend going to Nurata if you travel through Uzbekistan individually and spend more than one and a half or two weeks in the country.

Would you like to read more about Uzbekistan? In this blog post, which I published before travelling to the country in July 2016, you can read about other travel bloggers tips for Uzbekistan. Moreover, I have published blog articles about the highlights of Tashkent and the main attractions of Samarkand.

Note: I have completely paid for my trip through Uzbekistan by myself. There were no cooperations.

*All links which are marked with a star* are affiliate links. That means that I get a small commission if you book a hotel or a tour through one of those links – of course at no extra cost for you. Affiliate links help me to cover a part of the costs for running this website – so thanks a million in advance. When you are a returning traveller of G Adventures you even get your five percent discount in case you filled out the online evaluation form within a month after your previous tour. After booking just send G Adventures an email or give them a call and claim your discount if it doesn’t appear on your bill automatically. Being an affiliate doesn’t affect my opinion in any way. I only recommend companies and products which I personally use and love. All links which are not marked with a star* are no affiliate links.