A scary experience in Beijing 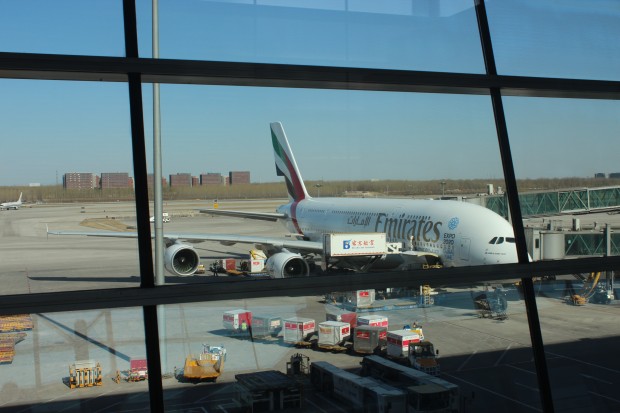 50 minutes before landing I am woken up by the Stewart who collects the blankets. Due to wind conditions the approach flight on Beijing Capital International Airport is quite rough and I am really surprised that such a huge airplane like the A380 can be shaken so much.

The immigration formalities are far less complicated than I thought and the immigration officer is quite nice. When giving me back my passport he smiles and says “Auf Wiedersehen” which is german and means “Goodbye”. In the arrival hall a man speaking decent English offers me a taxi to my hotel right after I fetched my luggage and passed the Customs. Instead of taking his offer I ask the staff at the airport information to write down my hotel’s name and adress in chinese characters and follow their instructions to the official taxi rank as I was prewarned by several resources, that the main goal of those self named “taxi drivers” is to rip people off.

At the official taxi stand in the Basement I am guided to a metered taxi by the traffic guards after showing them where I need to go. As expected my taxi driver doesn’t speak a word of English. In between it is late afternoon and the rush hour has started. The cab ride takes about one to one and a half hours. Eventually the taxi driver gesticulates, probably to show me that we are there. But this can’t be right! The neighbourhood looks a bit derelicted and I can’t see my hotel anywhere which is supposed to be a tall building. Maybe the staff at the airport information made a mistake when writing down the hotel’s name or adress in chinese! I am starting to ask myself what I am going to do in case we are in the total wrong area and if he drops me off in the middle of nowhere. It is impossible to communicate with him because all I now in chinese is “Ni hao” (Hello!). Also I can’t see any other westerners nor anyone who seems to speak English! Finally he turns right twice and indeed, we are at my hotel! It is a really nice hotel and most of the staff speaks English. After checking in I am relaxing a little bit in my comfy hotel room.

Later in the evening I order a taxi to the Wangfujing Road (“Wangfujing Dajie”), which is supposed to be one of the most famous and most important Shopping streets in China with Shops, Cafés and Shopping Malls which one can walk on foot over the full length. The major part of it is a pedestrian area. Already during the time of the Ming Dynasty it was an important commercial center, in the later Qing Dynasty it was home for the nobles who built their residences at the Wangfujing Road.

It’s already around 9.30 PM when I get there and many shops and restaurants seem to close soon or are closed already. I end up in one of the Malls in a place called “Yoshinoya” which is apparently a fast food chain like McDonalds and Kentucky Fried Chicken (KFC), but with an asian instead of a western menu and with returnable hard plastic instead of disposable dishes. On another table sits an elderly western man together with a young asian guy who I have both seen already earlier today at Beijing Airport. The elderly man was picked up there by that young man. From their greeting at the Airport they seemed to know each other before. Both are talking in English with each other and I am a bit jealous. At that precise moment I wish I had someone to show me around in Beijing for the next three days as well.

After dinner I am walking around a bit and stumble upon the Donganmen Night Market which is located in a side street of the Wangfujing Road. It is a local food market but instead of Rice, Noodles, Vegetables, Chicken, Beef and Pork vendours are offering Scorpions, Starfish, Cocoons et ceterra, everything deep fried. It is one of those food markets which can be found on Travel DVDs about China. Unfortunately I have left my camera in the hotel otherwise I would take a photo here.

Back on the Wangfujing Road a very fancy dressed young chinese woman approaches me, telling me in good english that she is a student and wants to practice her English. She invites me for a tea and asks me to follow her to a place nearby, but I refuse. Before going to China, I was explicitly warned of alleged students, inviting clueless tourists for a tea, presenting them a tremendous bill afterwards, whose full payment is enforced by dark figures, when necessary also with violence. I am having my tea at McDonalds instead. A group of young chinese people passes by, saying hi and wanting to know where I am from and what I am doing in Beijing. I am getting a bit sceptical, but apparently they really just want to practice their English and change a few words with a westerner.

When having finished my tea I am going back to that part of the Wangfujing Road where all the taxis wait for customers. I jump into a taxi, show the driver my hotel business card with the hotel’s name and adress in chinese and ask him to turn on the meter, but he shakes his head. “80 Yuan”, he says. “Excuse me, Sir, but I only paid 30 Yuan on the way here”, I object incredulously. “80 Yuan”, he persists. I explain to him, that I am not willed to pay almost three times as much as for a taxi going the same way by meter, but he remains stubbornly. I am getting out of the taxi, but before I am able to get another one, one taxi driver gives a signal to the others and I can see the police approaching the area with several cars. In less than a minute all taxis are gone. I decide that it might be better to go into one of the big hotels further down the road and try to get a taxi from there.

On the way here the taxi passed by the “Beijing Hotel”, a Five Star-Hotel which opened in the year 1900. I enter the hotel and as they apparently don’t have a Concierge, ask at the reception, if they could call me a taxi. After calling the taxi company the receptionist explains to me that all taxis are busy and that it might take around 25 minutes. I am also told that the Beijing metro doesn’t run anymore at that time of the day. I do not feel ready to take the Metro today anyway, not because I am scared to take the Metro but because I don’t know the way from the Metro station back to my hotel. As there are only a few local restaurants I might not find anyone there speaking English who I could ask for the way. The receptionist offeres me to sit down. Next to me sits a young chinese and smokes. I can’t see a sign anywhere pointing out that this is a smoking area, so he is probably just a rude guy breaking the rules.

Almost one and a half hours later I am still in the lobby of the Beijing Hotel. The reception staff has called the taxi company altogether three times, but without success. I myself have called my hotel to ask whether they could organize me a taxi, as this wasn’t a problem on the way to here, or if they could send me a car even if this comes out a lot more expensive, but also without being successful. In the meantime I am pretty much exhausted and I have no idea what to do.

Two fashion-dressed young chinese ladies enter the lobby, accompanied by two young men wearing black suits. At the reception desk they witness my disaster as they speak quite good English. After a while one offers me, that their two male friends can take me back to my hotel. “But you would need to pay them” the lady says. “How much would it cost?” I want to know. The two ladies change a few words with their friends. “200 Yuan”, she responds, “it is very far away.” I am currently at a point where I just want to go back to my hotel, no matter how. The two guys seems to be respectable and the two ladies even more. So I agree but manage to get the price down to 150 Yuan. Before I get into the car, the lady gives me her phone number and says that I should ask her friends to call her if I am facing any problems.

I am feeling queasy and I know that it is absolutely careless what I am doing here, but I have no idea what else I could do to get back to my hotel. We drive off. Initially, the two guys take the way the taxi driver took on the way to the Wangfujing Road, but then they turn onto the highway. The drive takes longer and longer and I am getting more and more nervous. After a while the drive seems to be endless. In the meantime I am terrified. What if those two guys are robbers, drug dealers, rapists or even murderers? I demonstrate the two guys to call their female friends. The lady who gave me her telephone number tells me that everything is ok and that it is just a very long way to go. I am not relieved at all. Suddenly at a roundabout the road is blocked. Now the two guys don’t seem to know the way as well. They give their female friends a second phone call and we continue. Another 10 to 15 minutes later we are finally in the area which seems to be a little familiar. Two more right turns and we are indeed at my hotel! Never ever on my travels I have been as happy as I am now to get to my hotel. I pay the two guys and go up to my room immediately. It was a very scary experience and I learned the lesson. I definitely won’t do it again. Tomorrow night I will order a metered taxi or if that doesn’t work, I will take the metro.